You are here: Home / News / With Deep Sadness We Announce the Passing of 2020 Aide to Grand Marshal Rich Lenihan 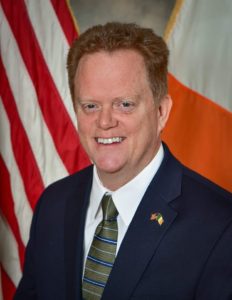 It is with profound sadness that we learn of the passing of Rich Lenihan. Rich was admitted to Nyack Hospital several days ago suffering from COVID-19. He fought a heroic fight against the virus and appeared to have won, but strength failed before his spirit.

Rather than for succumbing to the virus, Rich will be remembered for his infectious smile and contagious laugh. He was a proud Irish American who was always first to volunteer to help in any effort and was proud to carry the American flag for Division 3 in every parade. Rich was never prouder than the day his son Patrick was old enough to join him by helping to carry the division banner in the Rockland St Patrick’s Day parade, though at the time not much taller than the banner itself, while wearing the medal a relative had earned for service to Ireland in its war for independence.

Rich was incredibly excited to be selected as an Aide to Grand Marshal for this year’s St. Patrick’s Day parade, which was unfortunately canceled in response to the current crisis. We are thankful that we did have the opportunity to honor him at the Emerald Ball, and we reprint his biography below.

Our community has lost too many good people to this insidious, heartless disease; it is natural to ask “Why?”, “Why him/her, they were so good,” “They didn’t deserve to die” and despair on the lack of immediate answers. On this Good Friday, we join those who gathered around the Cross asking those same questions; we must take comfort in the belief that we will get the same answer that was given to them on Easter Sunday.

May Rich Lenihan and all those who have passed rest in peace where perpetual light will shine upon them. Ní bheidh a leithéidí arís ann (we will not see their likes again), but their kindness and actions will live forever.

Rich Lenihan was born in the Bronx to Richard and Johanna (Donnellan) Lenihan. His four grandparents emigrated from Ireland in the early years of the 20th century and arrived at Ellis Island to begin their lives in the new world. Rich is the first born son and second of four siblings. The family moved from the Bronx to East Meadow, Long Island then again moved to Rockland County, where Rich has been living ever since. He graduated from Suffern High school and continued his education at Rockland Community College. At twenty years old, following in his Father’s footsteps, Rich joined the New York City Police Department and worked as a patrolman in the 41st Precinct. He was promoted to  Detective in 1989 and in 2000 was promoted to Sergeant and transferred to the Bronx Detective Bureau. Rich retired in 2004 and is now an investigator for GEICO insurance company. In 1988 he met his wife Patricia in the Bronx and they married in 1991. They moved to Pearl River in 1991 and have two children, Caitlin and Patrick. The Lenihan family still resides in Pearl River and Rich has been a proud member of the Pearl River Ancient Order of Hibernians, Division 3, since 1992.