You are here: Home / Parade / Past Parade Honorees / 2020 Rockland County Hibernian of the Year Fergal Hayes 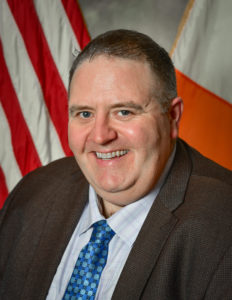 Fergal is the youngest child of Joseph and Maureen Hayes (nee O’Connell) and together with his siblings Miriam McCormick (nee Hayes), and his brother Adrian Hayes (of Pearl River) spent his youthful summers in the meadows of his maternal Grandparents farm working alongside his siblings and uncles, and playing hurling and Gaelic football with his local GAA team, Meelick.  He attended high school at St. Nessans Community College in Limerick City, and graduated from The College of Art Commerce and Technology, Limerick in 1993 with B.Sc., Quantity Surveying (Hons).

Following college he emigrated from Ireland to Berlin, Germany where he worked in the construction industry and subsequently immigrated to the United States where he landed in New York, in the summer of 1994.

After a short time in the Bronx, he soon found himself in Rockland County where he lived in Blauvelt, while working in New York City for Tishman Construction.   At a Halloween party in Nanuet in 1996 he met the love of his life Elizabeth, who happened to be moving to the state of Colorado at that time. Soon after he high-tailed it to Colorado and he and Elizabeth enjoyed the Colorado life style for 4 years.

In October 2000 he and Liz were married in Breezy Point, NY (Liz’s home town), and they returned from Colorado to live in Rockland County in the summer of 2001. One of the happiest moments of Fergal’s life was the birth of his daughter Kiera (13) in 2006, followed by the next two happiest moments, Sean (11) in 2008 and Hannah (9) in 2010.  Currently Fergal works as an onsite Owner’s Representative on a $150M, 92 unit, condominium development branded as St. Regis, for Alfred Weissman Real Estate, in Rye, NY.  Fergal is an avid guitar player and ballad singer, and can often be heard with his good friend John McDonough, singing in the bars around Rockland County, at the Hibernian House, at private parties, or his own back yard.

He enjoys spending time with Liz and the kids, and the family dog Bailey. No summer would be complete without camping trips to Knoebels, PA, days at the beach in Breezy Point, and the Jersey Shore.

His wish for this evening is for a joyous celebration of Irish heritage and culture, enjoy each other’s company, and celebrate that we all come together under the banner of friendship, unity and Christian charity.

“Ar scáth a chéile a mhaireann na daoine.”
Under the shelter of each other, people survive.