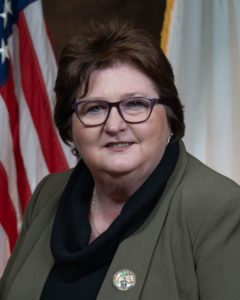 A native of Queens, N.Y. Lillian grew up in the Irish dominated neighborhood of Woodside, Queens. Her parents, Tom Cunnane hails from Kilgarrif, Knock, Co. Mayo and her mother Mary Cunnane (Nee: Carney) hails from Cloonbook, Bekan, Co. Mayo. She lived in Ballyhaunis, Mayo for 5 yrs. She attended St. Teresa’s elementary school, St. Michael’s High School and the Fashion Institute.  Lillian often remarks that growing up, Irish music and Irish dancing were always a big part of her life. And this continues to this day!

She married the love of her life, Brian Murphy in 1980 and moved to the 34th county of Ireland, The Bronx. She raised three sons Sean, Kieran & Brendan, while working in the restaurant business there. Her boys all played Gaelic Football at Gaelic Park.  In 1993, she ventured into the restaurant business and opened the Orangeburg Tavern with her partner Aiden Ryan. In business for 10 years, the Orangeburg Tavern hosted many Irish bands and many a fundraiser during that time. She has worked as a Comptroller at Edith Macy Conference Center for 11 yrs.

Lillian and Brian moved the Murphy clan to Pearl River in 1995 and are active members of St. Aeden’s parish. Lillian is an active volunteer in supporting their food pantry.

Lillian has been a member of The Rockland County Irish American Culture Center since 1995 and in 2009, she joined the Ladies Ancient Order of Hibernians, Division 2. And the rest, as they say, is history.  She held many division positions and she was elected by her fellow Lady Hibernians to the County Board and served four years as County Treasurer and four years as County President. During that time, she was actively involved in the Rockland Parade Committee, chairing the judge’s committee, which includes the tallying of votes and awarding prizes to the winners. Lillian has also been involved in the Feis Committee, the Emerald Ball Committee, and the Superstorm Sandy relief effort.

Lillian and Brian are the proud grandparents of 2 grandsons Patrick and Connor, who are keeping the tradition alive by playing football for the RGAA.  Lillian often remarks that the name she loves the most is that of being called, Nanny! She is extremely honored to be the Aide from Rockland County this year.