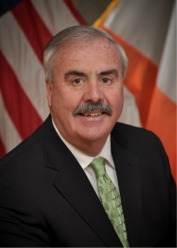 Frank McDonagh is the proud son of Frank McDonagh, Sr. of Claremorris, County Mayo and Catherine Healy McDonagh of New York.  Frank’s family history seemed to predestine him to become an active member in Division III.  In Claremorris, County Mayo, the McDonagh’s next-door neighbor, and close friend of Frank’s grandfather, was the future Archbishop of Armagh and Primate of all Ireland, John Cardinal D’Alton, whose name Division 3 proudly bears.

Frank grew up in the Bronx, attending St. John’s Elementary School and St. Raymond’s High School for Boys. He graduated from Iona College with a BS in Criminal Justice.  Frank proudly served as a member of the NYPD for 23 years, retiring as Detective, Second Grade.  Frank also retired from Geico Insurance Company where he continued his detective work as a fraud investigator.

Frank is an active member of the Pearl River Division III Ancient Order of Hibernians. He serves as President of the Hibernian House of Rockland, which provides a home for AOH meetings and events, senior citizen luncheons, Irish music and piping, benefits for charitable causes, to list a few.  Frank organizes the annual transportation of WWII veterans in classic cars as part of the Pearl River St. Patrick’s Day parade.  Aside from his active involvement in the AOH, Frank is also a member of The Friendly Sons of St. Patrick, American Legion, BPO Elks, NYPD Emerald Society and NYPD Holy Name Society.

Frank and his family have been active members in the Pearl River community for nearly twenty-five years.  Frank and his wife, Mary, moved their young family from Queens and cultivated a life in Pearl River.  They proudly raised their children and made lifelong friends in this community.  After a long and courageous battle with cancer, Frank’s wife Mary (Malvey), the love of his life, passed away in 2015.  Frank is the proud father of his two children, Frank and Caitlin.

Frank is proud of his Irish heritage and the strong community it has forged.  He is honored to have been elected the Grand Marshal of the 2020 Rockland County St. Patrick’s Day Parade and congratulates his fellow honorees.