You are here: Home / Parade / Past Parade Honorees / 2018 Hibernian Business Person of the Year Neil Acer 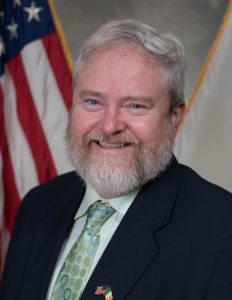 Neill was born in the Bronx to Gerard and Eleanor Acer in 1971. His maternal grandparents journeyed to the United States from Ireland (Roscommon and Leitrim) in the 1920s. Mike Ward and Annie O’Neill chose to call New York their home.

When Neill’s parents met and subsequently married, they, too, chose to stay in New York. His father, Gerry, was a retired New York City banker. His mother, Eleanor, is a retired New York City teacher. Eleanor worked in the classroom with children for over 45 years. Her patience is legendary and can be seen in her son. Neill and his two older siblings, Eleanor Annie and Gerard Michael, were all born and raised in New York.

Neill graduated from University of Rochester in 1994 where he double-majored in English and Psychology. While at U of R, Neill picked up a new hobby– he started home brewing – never realizing he was beginning his journey to the future and The Defiant Brewing Company! In addition to being a graduate of the University of Rochester, Neill received formal brewing training at the Siebel Institute of Technology and World Brewing Academy (Chicago, IL).
While on his journey, he met and married his wife, Amy Acer. Together, they have two beautiful children: Neill Connor (12) and Abigail Eleanor (7). It was important to Neill that Amy and the children be introduced to the Emerald Isle and all of the extended family in Ireland. In 2011, Neill took the entire family on an adventure to Ireland. Together, everyone explored the countryside far and wide – spending time with relatives and extended family, visiting old homesteads including the family bog, as well as sites rich in history for all Irishmen.

When it came time to open his own brewery, Neill knew he had to be in New York. And, what better place than Pearl River!
Neill, owner and brew master, brings over twenty years of professional brewing experience to The Defiant Brewing Company (Pearl River, NY). From the start, Neill’s career has focused on bringing high quality, unique (some may say “defiant”) craft-brewed beer to patrons in and around the lower Hudson Valley in places like The West End (New York, NY), The Colorado Brewery and Steakhouse (Danbury, CT), and Mountain Valley Brew Pub (Suffern, NY). Neill’s creativity and love for his craft help him win the praise of discerning beer drinkers, critics, and certified judges worldwide. Defiant ales and lagers can be found locally as well as throughout New York State and New Jersey. Neill has grown Defiant from a one-man operation to a company of over 20 employees in a little over 12 years! Neill and his beers have won numerous awards, including two International gold medals in the World Beer Cup. Neill is also a renowned, International beer judge and has traveled to Canada and Brazil in recent years to judge competitions.