You are here: Home / Archived News / The Ancient Order of Hibernians Statement on the Passing of Martin McGuinness 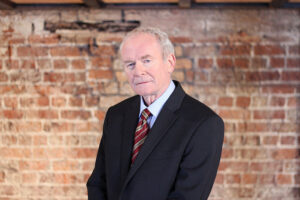 “It is with deep sadness that the Ancient Order of Hibernians learned of the passing of Martin McGuinness.  If the measure of a man is how much he has grown in his life; then it must be acknowledged that Martin McGuinness became a giant in his all too brief 66 years on this earth.

In his youth, Martin McGuinness was filled with the passion of youth to fight injustice, injustice he witnessed personally as he saw peaceful protestors seeking nothing but equality under the law viciously attacked; attacks that were met with indifference by authorities. This phase of Mr. McGuinness’ life may seem at stark variance with today’s recollections, shared by even his political opponents, of a man of principle, kindness and good humor.  We find nothing incongruous in this as we remember an observation made by British General Blackadder about another Republican, Padraig Pearse, a hundred years earlier. General Blackadder noted then “There must be something very wrong in the state of things that makes a man like (Pearse) a rebel”.  There was certainly “something very wrong in the state of things” in Northern Ireland in the youth of Martin McGuinness; even today there is still much that remains to be done.

However, when the opportunity to address the problems of injustice and inequality by peaceful legislative means presented itself through the Good Friday Agreement, Martin McGuinness had the courage to take the first steps down a new path to peace.  Let no one underestimate the bravery needed to abandon the familiar and well-worn byways of conflict and travel a new road with former adversaries with little but hope to guide him.  The images of nearly ten years ago of Martin McGuinness and the Rev. Ian Paisley, men who were the personification of the opposing factions of “the Troubles”, laughing in sincere friendship showed the bright potential of what a peace based on the parity of respect enshrined in the Good Friday Agreement could achieve for the communities of Northern Ireland.  Martin continued to walk the difficult path of peace for almost a decade with successive First Ministers and British governments.  He remained fixed on the ultimate destination of a lasting peace, building new bridges of understanding across the artificial chasms that have divided the communities of Northern Ireland.  He continued that journey undeterred by the numerous attempts to place obstacles and checkpoints across that path from those incapable of growing beyond the past as he did.

We are saddened that Martin McGuinness’ body, but never his will, gave out before he reached the final destination of achieving a peaceful and united Ireland that cherishes all the children of the nation equally.   We are thankful for the trail Martin McGuinness has blazed; it is up to us who remain to continue the journey to peace in his memory.”