You are here: Home / Parade / Past Parade Honorees / Rockland County Hibernian of the Year 2017 Thomas Zugibe: 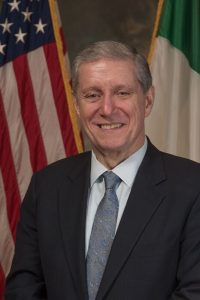 Thomas Patrick Zugibe and his wife of 41 years, Peggy, are the parents of 4 grown children: Tara (Scott) Munson, Kristen (Robert) Kolka, Thomas and Mary and 4 grandchildren, Scott, Tyler, Noelle & Abigail. Tom is very proud of his Irish Heritage. He has always been a strong supporter of the A.O.H. and its many functions throughout the years, such as the Emerald Ball and its Journal, Division 1 Annual Dance and its Journal, and the Division 1 Annual Communion Breakfast. Through the years, It was a rare St. Patrick’s Day Parade in Pearl River that Tom was not seen marching down the Avenue. When he realized he was qualified to join the A.O.H. through his Mom who was an O’Leary, Tom immediately joined Division 1. He would volunteer immediately for any activity that required his participation. It was for this reason that Division 1 invited Tom to be an honored speaker at its Annual Communion Breakfast several years ago. He and his wife are lifelong parishioners of St. Peter’s Church where Tom serves as a lector and Eucharistic Minister.

Thomas Zugibe was elected Rockland County District Attorney in 2007. He leads a staff of 30 prosecutors and two dozen criminal investigators. Since first taking office in 2008, Tom has transformed the District Attorney’s office through the development of aggressive investigative and prosecutorial initiatives while implementing major innovative prevention and diversionary programs with a strong emphasis on youth. Specialized teams of prosecutors, investigators and forensic auditors now focus on the investigation and prosecution of complex and/or large scale financial crimes such as embezzlements, welfare fraud, investment fraud, business fraud, insurance fraud, employment/compensation fraud, identity theft, tax evasion, organized crime and public corruption. At the same time, he has implemented innovative programs addressing substance abuse, behavioral health and people with intellectual and developmental disabilities.

More recently, Tom spearheaded an exciting new collaboration between his office, Rockland BOCES and the Rockland County Departments of Probation, Mental Health and Social Services entitled the Partnership for Safe Youth. This collaborative is now recognized as a groundbreaking initiative that enhances the effectiveness and productivity of services for youth and their families. Indeed, the Federal government recently awarded a $4 million grant to further the work of this initiative as a potential model to be replicated across the nation. This co-location center streamlines and coordinates the work of the individual agencies to identify at-risk youth and coordinate an effective response to address issues related to their safety.

Prior to his election, Tom Zugibe worked for two decades in private practice and served as the West Haverstraw Village Justice for a period of eighteen years. He resigned from that position to run for District Attorney. Between 1981 and 1987, Tom served as a prosecutor in the Rockland County District Attorney’s Office, where he was promoted to Executive Assistant District Attorney. His tenure in the District Attorney’s Office included directing the Narcotics Division and Major Offenses Division. During this period, Tom investigated and tried a vast array of both violent crimes and complex “white collar” cases.
District Attorney Zugibe began his legal career as a Special Assistant Attorney General in the Office of the New York State Deputy Attorney General for Medicaid Fraud Control.
Tom is a 1975 graduate of Manhattan College and received his Juris Doctor degree from St. John’s University School of Law in 1979. He is admitted to the New York Bar and the Federal District Courts for the Southern and Eastern Districts of New York.