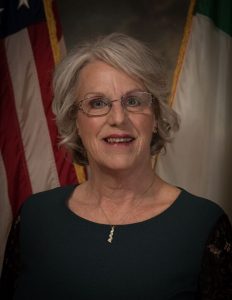 Helen Kilgallen Murphy is the proud daughter of Thomas P. Kilgallen of Portavade, Sligo and the late Bridget Teahan Kilgallen of Lauragh, Kerry. She was born in Lenox Hill Hospital, along with her two brothers, Thomas and Paul. She has been married to her husband, Michael for 30 years.

She joined LAOH Division 3, Pearl River, NY in 2003 and is an active member. She was Recording Secretary 2010 – 2011 and is currently the Recording Secretary. Helen was a member of the winning LAOH Trivia Teams that helped raise monies for the Rockland County GAA.

As a member of LAOH Division 3, she has volunteered to assist with Dancing with the Stars, The Fashion Show, Dinners or whatever she can give her time to. In 2007, she was the LAOH Aide to Grand Marshall Mary O’Sullivan.

Since 2006, she has been a member of the Rockland County St. Patrick’s Day Parade Committee, where she will do whatever is asked of her, such as marking the parking lot beforehand, or cleaning up the lot afterwards, making signs and assisting with the line of march in the parking lot.

Helen was a member and past president of the Irish Arts Forum in the mid 1980’s. She performed in a few productions, and assisted with the all aspects of the off stage productions.

Helen was instrumental in changing how the Department of Transportation of New York proceeds with projects that will impact communities. In the early 1990’s, she was asked to be a member of a new concept, Citizens Advisory Committee, that gave input and feedback towards planning and implementation of sustainable development and strategies. She was recognized by NYMTC and The Town of Orangetown for her efforts.

Helen presently is employed with Equinox Management Group as an Executive Assistant. Prior to that, she worked in her family’s business, The Peanut Grill Tavern, where her strong work ethic, sense of fairness and the ability to see the good in all, was instilled by her parents.

In trying to give back to the community, she did run for public office, although unsuccessful.

Helen’s Irish heritage is a source of pride and strength, and exemplifies her commitment to promoting Irish Culture.