You are here: Home / Parade / Past Parade Honorees / Hibernian Businesswomen of the Year Kay O’Grady and Michelle O’Grady Worob. 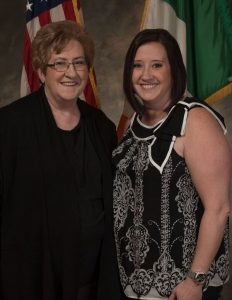 This year, our Businesswoman of the Year is Kay O’Grady, from Luigi O’Grady’s. Kay shares this honor with her daughter Michelle O’Grady Worob.

Catherine (Kay) was born and raised in Graignamanagh, County Kilkenny. Kay was born to Bridget and John Lakes, and was the youngest of 10 children (four boys and six girls).

At the young age of 18, Kay moved to London to find work, and ended up meeting her match – John (Sean) O’Grady. They married in 1968, and moved to America to build a life and start a family. Kay and Sean settled in Orangetown in 1972, and raised their three children there – Darren, Michelle (Worob), and Siobhan.

Kay and Sean were charter members of the Rockland Irish American Cultural Center in Blauvelt, and they were active. Sean and other members performed many repairs and renovations at the Irish Center, and Kay was always an active participant, helping wherever she was needed.

Kay and Sean’s kids attended Nanuet public schools, and participated in Pearl River Little League and Orangetown Mighty Midgets. Kay volunteered her time as a coach for her daughters’ soccer teams as well, leading them to several undefeated seasons. She was also the founding member of the R.I.A.C.C. women’s softball team, and she started the R.I.A.C.C. bowling league at Pearl River Lanes.

Kay spent her life working in the food/bar industry, and jumped into business-ownership in 1993, when she bought the snack bar in Pearl River Lanes Bowling Alley. After a few years there, she took the plunge and bought a little deli in Pearl River – and so began Luigi O’Grady’s where she joined forces with her daughter, Michelle. Over the last two decades, their little deli has grown into one of the most successful deli and catering businesses in Rockland County.

Kay and Michelle have made it their number one priority to give back to the community that has given so much to them. They generously support local charities and fundraisers, and participate in community events year-round. The O’Grady family is well known for their generosity.

In 2009, Kay’s beloved husband was diagnosed with Alzheimer’s disease, and so began her next chapter – as devoted caregiver until his passing in 2013. During that time, Kay became involved in Alzheimer’s Association of Rockland County.

In order to give back, Kay and her children started Team O’Grady, a fundraising effort to raise money for the Rockland County chapter of the Alzheimer’s Association. Kay and her family have raised over $100,000 since 2011. Every year, Kay and Team O’Grady participate in the annual Walk to End Alzheimer’s, where they remember Sean for the wonderful husband, father, and grandfather he was.

Last but not least, Kay’s proudest title is grandmother – to Madelyn (13) and Shayne (11).

Michelle was born and raised in Nanuet to Irish Born Parents, John (Sean) and Catherine (Kay) O’Grady. She is the middle of three children, with an older brother Darren and a younger sister Siobhan. She has been married to her husband, Jason, for over 16 years and they have two daughters, Madelyn (13) and Shayne (11). They reside in Pearl River.

As a youth, Michelle was an active participant in Pearl River Little League and Orangetown Mighty Midgets, her daughters continue the tradition. When Michelle started Nanuet High School, she decided to put sports aside for her first job, Shoprite in Pearl River where she remained for almost 10 years. She attended Nanuet Senior High School and then went on to earn an Associate’s Degree from Rockland Community College and a Bachelor’s Degree with Honors from Pace University, where she majored in Business Management and Accounting.

Michelle has co-owned Luigi O’Grady’s along with her Mother, Kay, for almost 20 years. During that time, Luigi O’Grady’s has become one of the most successful deli and catering businesses in Rockland County. Michelle and Kay have made it a priority to give back the community that has supported them in their success. The O’Grady family is known for their generosity they have supported countless community organizations and fundraisers. They go above and beyond and in addition to the financial assistance you will often see Michelle at the events volunteering her time.

A charity that has been become very important to Michelle is the Alzheimer’s Association of Rockland County. Michelle and her family lost their father to the disease in 2013 and have made it a priority to give back to the organization that helped them so much throughout their father’s illness. Throughout each year, they hold several fundraisers for the Alzheimer’s Association and have quickly become one top fundraising teams for Rockland County Raising over $100,000 to date.