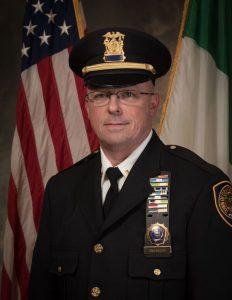 Lieutenant Michael Shannon, the youngest of five children born to Nancy and Joseph Shannon, was raised with his two brothers and two sisters in the Palisades home where Michael and his own family continue to reside today. Michael and his wife, Jennifer, are proud parents of two wonderful sons, Jack, 17, and Nicholas, 14, who both attend Bergen Catholic High School.

Active with his family at Tappan’s Our Lady of the Sacred Heart and currently on its CYO board, Michael knew from back when he was attending grammar school there that he wanted a law enforcement career.
For over the past twenty years, Michael has marched with the Orangetown Police Honor Guard in the Rockland County Ancient Order of Hibernians St. Patrick’s Day Parade escorting the Grand Marshall and Parade Commander. As the 2017 Parade Commander, he looks forward to marching past his friends and family, assembled annually for the parade by their motor-home situated at Middletown and Blauvelt Roads. Michael is grateful to the parade committee and the Rockland County AOH for this great honor and to his family for their unwavering support.

The Shannon heritage has long valued cultural traditions and social gatherings. Michael’s late father himself grew up in a large family of six boys and three girls in Brooklyn. The Irish lineage of both of Michael’s paternal grandparents includes, from County Clare, the family of his great-grandmother Margaret Shehan (the spelling changed to Sheehan in America) and, from just further north in Galway, his great-grandparents, John and Belia Shannon. Michael’s grandparents, John and Margaret, who moved from Brooklyn when Michael’s father was a child, owned and operated Shannon’s Pavilion on Round Lake; what was once their home in Highland Mills is now the Black Forest Inn. Michael’s mother continues to lead family time together including at her own lake home upstate.

During his school years, Michael enjoyed football and baseball. After graduating from St. Joseph Regional High School, Michael attended Binghamton University, graduating with a B.S. in Applied Social Sciences and a minor in Criminal Justice. Michael entered the New York State Police Academy in Albany, New York in October 1990. In February 1992, he joined the Town of Orangetown Police Department where he looked forward to serving his community in which he lived.

Michael has served in various capacities ranging from patrol, community policing, traffic and commercial vehicle enforcement and the Rescue Entry and Counter Terrorism Team (REACT) for the county, where he is currently assigned to the Standards and Oversight Committee. He was promoted in 2008 to Patrol Sergeant on the midnight shift and in 2014 to Detective Sergeant, where he managed the Accreditation Program, Budgeting, Professional Standards and Inspection and Applicant Investigations. Patrol Lieutenant since June 2015, he currently supervises three patrol squads. He has served on the Palisades Swim Club board and on the Orangetown Police Benevolent Association as Vice-President and Secretary.