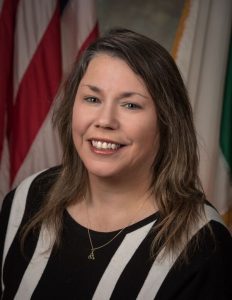 This year, our Grand Marshal for the 55th Rockland County Saint Patrick’s Day Parade is Carmel Reilly. Carmel will follow in her father’s footsteps when she leads the line of march on March 19th, 2017, 43 years and 2 days after her dad. Talk about “Keeping The Tradition Alive!”

Carmel and her three sisters were raised in Blauvelt, the children of Matt and Moira Reilly. Matt and Moira have been Hibernians for most of their adult lives and incorporated this dedication to Irish Heritage into the everyday life of their family. Every Sunday the sound of Irish music from WFUV was heard throughout their home. Of course, this led to Irish stepdancing becoming a part of Carmel’s life, and so she danced in the first Feis held in Rockland County in 1974.

Carmel joined the Ladies Ancient Order of Hibernians Division 3 in the fall of 2001 and immediately joined the St. Patrick’s Day Parade Committee. She has remained an active member of both to this day.

Through the years Carmel has been involved in many projects for the Irish Community:

Carmel served as a member of the Rockland Feis Committee for several years and for two years was Co-Chairperson, along with Michael O’Sullivan, for the Feis Journal.

As mentioned before, Carmel has a strong love for her Irish Heritage and the homeland of her parents. Thus when the Committee was formed to commemorate the Heroes of 1916, she immediately joined and became an active member, organizing and participating in the following activities:

Organized a Night At The Races which provided the Committee with much needed start–up funds enabling them to get the Commemoration up and running.

Because of an interest in presenting the true story of the Women of 1916, Carmel joined a drill team of re-enactors representing the Cumann na mban. Along with the men from Clan na Gail, the team met every week, drilling for 1-2 hours at a time. They marched at the Calvary Cemetery on Easter Sunday and once again on April 24th leading the Parade for the Commemoration at the Rockland G.A.A. fields.

Carmel also assisted with the G.A.A. youngsters who were part of the Color Guard carrying the 32 Counties flags during the St. Patrick’s Day Parade and again for the Commemoration. This was a proud time for Carmel as she was pleased to demonstrate what the Rockland Irish Community could do in commemorating the Heroes of 1916.

Carmel and her good friend John Lowry have also aided the G.A.A. in Fundraising by developing an eight week Pub Quiz.
On too many occasions to count, Carmel has been available to assist the Irish Community fundraising by sending email notices to hundreds of Supporters.

In need of help? Call Carmel and she will answer. Examples of her generosity and cooperation to worthy causes: Dancing Like the Stars fundraiser, help for the victims of Hurricane Katrina, and the John O’Hara and John Kennedy Benefits.

And this past November 6th, Carmel completed the 26.2 miles of the New York City Marathon, after several years of having run numerous racing events for charity, such as the John Bellow 5K, the Dennis P. McHugh 5K, the Women’s Distance Festival, which benefits domestically abused women, the Nun Run (for the Sisters of St. Dominic), and the Mickey Sullivan Duathlon where she has to run and bike for Team KJ hoping to put an end to Huntington’s Disease.

Carmel resides in Pearl River, is a Dominican College Alumnus, and is employed as the Store Manager at Bergen Supply. She was recognized by the Rockland County A.O.H./L.A.O.H. in 2008 as Hibernian of the Year. In 2010 she was honored with their Distinguished Service Awards by Irish Northern Aid and Rockland G.A.A.