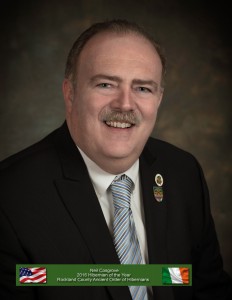 Son of the late Terence and Elizabeth (nee Gorman) Cosgrove, Neil is the oldest of four children, with sisters Nancy, Monica and Colleen. His father was a 28-year veteran of the NYPD, retiring with the rank of captain, while his mother worked Metropolitan Life Insurance in Pearl River. Both of Neil’s parents instilled in him at an early age an appreciation of his Irish heritage. His paternal grandparents emigrated from Shinrone, County Offaly; his maternal relatives from Munster. In his youth his paternal Grandfather had been active in the land reform movement which resulted in him being a guest at “Her Majesty’s pleasure”; two of his maternal relatives had fought with the 69th New York in the Civil War.

A graduate of Clarkstown High School South, Neil attended Manhattan College, where he earned a Bachelor of Science Degree, with majors in physics and mathematics, and where he has fond memories of being an active member of the Gaelic Society. Neil went on to earn a Master Degree in Computer Science from Polytechnic Institute of New York. He is currently employed as a Senior Project Manager at Moody’s Corporation
.
Neil is an active member of the Ancient Order of Hibernians and is active in its support of Irish causes. Neil currently serves as the National Political Education Chairman, Anti-Defamation Chairman and Irish American Heritage Month Chair. Neil has been an ardent campaigner against the proliferation of bigoted and denigrating stereotypes targeting the Irish and Irish Americans. He has written multiple articles that have been featured in the Daily News, New York Post, Washington Post and other media outlets speaking out against defamation. Recently he was successful in having the nation’s largest retailer pull several shirts with negative Irish messages from their stores. With the support of his brother and sister Hibernians of Rockland County, Neil helped organize a major protest against Spencer’s Gifts, a major purveyor of degrading and negative stereotype laden St. Patrick’s Day merchandise. This protest was covered by all the major TV outlets in the tristate area. Neil is also the chair of the Irish American Heritage Month Committee of the AOH, and is dedicated to seeing the many positive contributions and sacrifices that Irish Americans which are still undervalued fully recognized, especially in our Schools and Cultural Institutions. Neil was recently appointed the National Political Education Chair and is currently working to encourage political support for important Irish cause such as full commitment to the MacBride principles.

Neil is currently the recording secretary for the Rockland County Board and Division 3, Pearl River. Neil also serves Division 3 as their historian, publishing a monthly history article on Irish or Irish American history. He is a member of the Rockland County AOH St. Patrick’s Day Parade Committee and the Division 3 Scholarship Committee and the 1916 Commemoration Committee. Neil is honored to travel with the Rockland AOH Pipe Band and walk the same streets as Pearse, Connolly and Plunkett as part of their Color Guard as part of Ireland’s 1916 centennial commemoration.

Neil is married to Margaret Cosgrove (nee Adams), originally a native of Glasgow, Scotland. He is the proud father of Kara. Kara was an ardent Irish dancer and musician and in her support Neil and his wife Margaret have been proud members of the Verlin School of Irish Dance Parents’ Committee, and helped organize their annual feis for many years. Neil is the very proud grandfather to his new grandson, Sean Joseph O’Brien and is dedicated to passing on his Irish heritage to this newest generation.