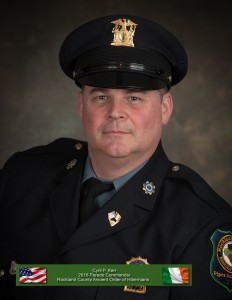 Born in Queens, New York in 1965, Detective Cyril Kerr is the middle child born to Ellen and Eugene Kerr. Ellen hails from County Fermanagh and Eugene from County Monaghan. The family moved from NYC to Stony Point in 1967. During his school years Cyril enjoyed playing sports including Gaelic football, soccer, and baseball. Cyril graduated from North Rockland High School in 1983.

In 1986 Cyril began his 30 year career in law enforcement when he joined the ranks of the NYPD working patrol and in the Narcotics Unit. In 1991 Cyril was promoted to Detective and was assigned to the Joint Organized Crime Task Force working alongside the FBI. As the lead Detective in a 5 year investigation into organized crime, Cyril’s work resulted in the arrests of 20 mobsters including the upper echelon and the forfeiture of over 20 million dollars of assets. Throughout his tenure with the NYPD, Cyril received numerous awards and commendations including being instrumental in identifying and assisting in the capture of a killer of an undercover Narcotics Officer.

In 1997 Cyril continued his law enforcement service in Rockland County. He became an Executive member of the Rockland County Patrolman’s Benevolent Association in 1998 and was elected President in 2006. As President, Cyril was instrumental in the renovation and rededication of the Brinks Robbery Memorial Site in Nyack for its 25th anniversary and led the effort to have the site marked as a historic location. Cyril currently sits on the PBA’s Board of Directors for the Widow’s and Children’s Fund and the Welfare Fund.

Proud of his Irish heritage Cyril became active in the RC Police Emerald Society and has been a Board member since 1999 and is a past President. Cyril is also a proud member of AOH Division 1. Detective Kerr currently works in the Rockland County District Attorney’s Office assigned to the Special Investigations Unit where he investigates White Collar Crime and Fraud. Teaming up once again with the FBI, Cyril is also assigned to the Public Corruption Task Force investigating corruption and crimes against the government.

Cyril holds a Bachelors degree in Criminal Justice and is a Certified Fraud Examiner as well as a Certified Financial Crime Investigator. Cyril has had many partners in his career but his love, and “partner for life” is Diane and they are the proud parents of their son Christopher. Christopher is studying Mechanical Engineering at Northeastern University and is a drummer in the RC Police Emerald Society Pipes & Drums Band.