You are here: Home / Parade / Past Parade Honorees / 2016 Hibernian Businesswoman of the Year Margie Mulvihill 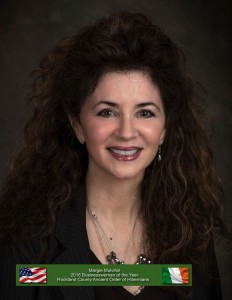 Born in New York, Margie is the oldest child of Mike Mulvihill from Moyvane, Co. Kerry and Peg Mulvihill (nee Holly) from Asdee, Co. Kerry.    Margie has two brothers, Mike and Willie, both FDNY lieutenants currently studying hard for the Captain’s test. She was introduced to the Irish music and dancing scene at an early age by her granduncle, popular dancing teacher Jerry Mulvihill, and her cousin, fiddle legend Martin Mulvihill. Perhaps more influential, though, were her mother’s stories and passionate singing of rebel songs that had been passed down through generations of Irish women, most notably Margie’s grandmother Mag Holly nee Long, a member of Cumann na mBan, that instilled in her both a deep love of all things Irish and an abiding love for the music. In those early days, she went to Ireland many times with family and fell in love with Ireland, developing an especially deep connection with Moyvane and its people.

Margie remained in Ireland and was there during the time of the Hunger Strikes, a painful time in Irish History she’ll never forget. It wasn’t long before she was running from session to session with other musicians from all over Ireland.   Margie and her old band mate Carmel Glendon eventually met up with Kerry singer Mary Courtney, and together they formed the group Morning Star. They played festivals and concerts all over the country and even provided music for Harold Prince’s play Grandchild of Kings, where they met many stars of stage and screen. Although she never thought Morning Star would last for more than a couple of years, the group remained together for twenty.

Margie is married to fiddler John Reynolds, who played with the great Michael “Jesse” Owens for many years and then with Morning Star for six. John can be counted on whenever there is a need in the community. The two feel blessed to be united in so many ways; their music and love have taken them in many directions. They have had the opportunity to play in many special places, from the Kerry Hall in Yonkers to the high seas with the fantastic Joanie Madden’s Folk’n Irish cruise to Medjugorje, where they were humbled to have had the opportunity to play with Andy Cooney on two occasions.

After Morning Star, Margie began sharing her love of music with local children. Her reputation as a great teacher grew quickly and developed in unexpected ways. She and her fellow teachers Rose Flanagan and Patty Furlong bring countless children to Ireland to compete at Fleadh Cheoils every year. Their under 12 ceili band won the All Ireland in 2012, a feat not achieved by an American ceili band in thirty years. This experience teaching led her to playing at céilithe, a source of joy she and John participate in frequently. They formed the ceili band The Pride of Moyvane, named after her Dad’s birthplace and the title of a reel penned by her music teacher, the late Martin Mulvihill. You can hear Margie’s and John’s musical influence in all of her students, but it is most clearly found in the playing of Margie’s daughters Erin (fiddle and whistle), the 2011 New York Rose of Tralee who has a degree in music from Limerick University and teaches fiddle, whistle and banjo; Bláithín (accordion wizard), a member of the band Girsa who has degrees in Political Science, History and High School Education; Neidín (singer/songwriter, whistle, banjo, guitar), a college senior; and their thirteen-year-old son, John Paul , who plays the fiddle, banjo, mandolin, whistle, piano and guitar.