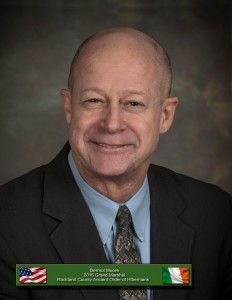 Dermot was raised in the Bronx, one of eight children born to Mary Holt and the late Thomas Aquinas Moore.  He attended Holy Family Elementary School, the Bronx High School of Science, and received a B.A. in Criminal Justice from Iona College.  He joined the NYPD in July of 1981 and retired in December of 2002 having attained the rank of Sergeant, Supervisor Detective Squad.  Dermot is currently a Vice President in corporate security. Dermot married Joan Sweeney in 1983.  They live in Pearl River and have four children and a daughter-in-law; Thomas Ashe (Colleen), Terence MacSweeney, Conor Naughton and Margaret O’Rourke.

Dermot has been president of John Cardinal D’Alton AOH Division 3 for ten years.  Under his leadership, the Division has grown to be the largest Division in the U.S and has made tremendous progress towards fulfilling its purpose “To promote and perpetuate Irish culture between ourselves, our children, and our community. To work for the freedom of Ireland, to uphold the constitution of the United States, and to work for the glory of God.”  Under his guidance, the Division instituted an Irish-American heritage examination as part of its scholarship program and has increased its scholarship awards to $10,000 yearly.  The Hibernian House provides a home for students of piping and Irish dancing and the Division hosts numerous Irish cultural activities that are open to all free of charge including most recently a highly popular film series on the lives of the signatories of the 1916 proclamation.  Living up to the Hibernian motto of “Friendship, Unity, and Christian Charity”, under Dermot’s presidency the Division remains an active advocate and sponsor for the elderly, veterans, the young and the physically and mentally challenged citizens of our community.  The Division and Hibernian House are major contributors to the Venture Foundation, the GAA, and numerous local charities as well as national AOH charities.   Dermot led relief efforts after Superstorm Sandy, repairing homes in Breezy Point and organizing deliveries of food, tools, and clothing to multiple affected areas. Dermot is intensely proud of his Hibernianism as well as his Division and its efforts to live up to its purpose and motto.  He has recently been elected as NYS AOH District 8 AOH Director.

Dermot’s Irish-American roots run deep. His wife is a past president of Division 3 and Rockland County LAOH. Dermot’s mother is a Gaelic scholar, past Grand Marshal of the NYC St. Patrick’s Day, and direct descendant of the leader of the Wicklow rebels in 1798, General Joseph Holt.  She named Dermot in honor of 1916 leader Sean MacDiarmada and her uncle Sam O’Reilly fought in the GPO. Dermot’s father was born in County Kerry and was a member of the FDNY Emerald Society and a president of AOH Division 3 in the Bronx.  Dermot has been playing the bagpipes with the Kerry Pipers since 1973 and his children and numerous relatives are also pipers and drummers.  He is a member of the NYPD Emerald Society and the Bronx Gaelic League. Dermot has been honored for his service to the Irish American Community by numerous organizations; 2010 Hibernian of the Year by the Rockland County AOH, 2014 Rockland Irish Northern Aid Man of the Year, and for Community Service by the Rockland County Friendly Sons of St. Patrick in 2015.  He is a dedicated father and husband who continually gives freely of his time and talents at many events for the GAA, Irish Northern Aid, St. Margaret’s Church, LAOH and numerous other organizations and causes.