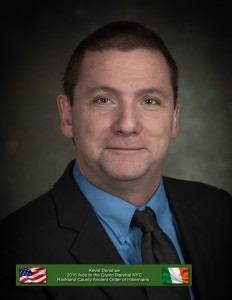 Kevin was born in St. Albans, Queens to Timothy and Mary Donohue. He moved to Pearl River in 1974 and attended St. Joseph’s Regional High School.

Kevin joined AOH Division 3, took his major degree, and was elected Division Marshal all in 1998. He has been an active member and officer ever since and currently the longest serving Division Officer. He was elected County Marshal in 2006 and has faithfully discharged his duties ever since.

Whether it be helping out at Senior Citizen Luncheons, parties for the handicapped, Superstorm Sandy cleanups in Breezy Point, and fundraisers, Kevin can always be relied upon to be one of the first to step forward and is a tireless worker.
Kevin has proudly marched every year with Division 3 in the Rockland Parade and with the county in the New York City parade. Kevin has often taken on the important and thankless task of ensuring that the symbols of our heritage, our flags and banners, make it safely to the parades and return home again.

For his dedication and service to the Ancient Order of Hibernians and his commitment to our motto of friendship, unity, and Christian charity, Division 3 is proud to nominate Kevin Donohue for Rockland County Aide to Grand Marshal for the 2016 New York City Saint Patrick’s Day Parade.