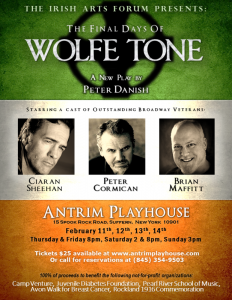 The Irish Arts Forum will be presenting “The Final Days of Wolfe Tone”, a new  play by  Peter Danish starring Broadway actors, Ciaran Sheehan, Peter Cormican, and Brian Maffit at the Antrim Playhouse in Suffern.  Tickets are only $25.00 and 100% of the  proceeds will benefit multiple worthy nonprofits:  Camp Venture, The Juvenile Diabetes Foundation, Pearl River School of Music, The Avon Walk for Breast Cancer, Rockland 1916 Commemoration

Wolf Tone, was the leader of the United Irishmen and is considered the Father of Irish Republicanism.  While the son of a privledge Protestant family, he saw the scourge of government sponsored sectarianism and prejudice for the tool of oppression it was and formed the United Irishmen to establish an independant republic where all Irish men and women could live in peace and freedom. “The Final Days of Wolfe Tone” tells the tale of his last days in prison leading up to his execution – days spent writing the chronicle of his life, that gave birth to the Irish Revolution that would inevitably lead to the Rising of 1916.