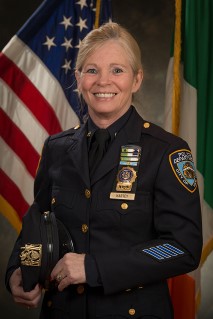 Teresa was born in Philadelphia at the Naval Hospital.  Her father, Thomas Hartey was a 27 year veteran of the US Navy having retired as a Master Chief.  Her mother, Joan Butler, and father both were born and raised in Washington Heights, New York. Her dad’s family hails from County Galway and Limerick, and her mom’s family (Butler) emigrated from County Roscommon and Waterford. Teresa grew up in Good Shepherd Parish in the neighborhood of Inwood, Manhattan. Teresa has a sister Ellen Haren, (Mike) who resides in Pearl River, a brother, Thomas Hartey, (Jacquelyn) that still resides in Inwood, a sister Lianne (Tom) Rhodes and Brother Roger, who reside in Sacramento, California.

After high school, Teresa entered the New York City Police Department in July 1981.  After graduation from the Police Academy she went to work in Harlem as a trainee.  Having completed (6) months of training; she was then transferred to the 46 Precinct in the South Bronx and was a Patrol Officer until the end of 1985.  At this time, Teresa was assigned to the Applicant Investigation Squad to conduct investigations for prospective Police Officer candidates.    In 1988, Teresa was assigned to the 48 precinct Detective Squad where she conducted investigations in all areas of Homicide, Robbery, Assault, Burglaries and Domestic Violence. Teresa was promoted to Detective 3rd Grade in September 1989. In 1993; Teresa was then assigned to the 42nd precinct Detective Squad.  In September 1999, Teresa was promoted to 2nd Grade Detective.  In September 2001, as a result of the World Trade Center Disaster; Teresa worked at Ground Zero and the Staten Island Landfill on a daily basis conducting recovery operations from September 2001 until March 2002.  As a result of poisonous exposures from this assignment; Teresa was forced to retire in March 2002 from the Police Department.  Since then, Teresa has been employed by GEICO as a Senior Fraud Investigator.

Teresa moved to Pearl River in 1997.  Her mother and sister Ellen both followed and reside in Pearl River.  Teresa’s children, twin boys Michael and Patrick O’Brien, 26, were raised in Pearl River and graduated from the Pearl River High School in 2006.  Michael went onto graduate from SUNY-Oswego and Patrick enlisted in the US Marine Corp.  Both sons still reside in Pearl River. Teresa was married to Raymond Adametz on September 1, 2006. Raymond is a bagpiper with St. Columcille United Gaelic Pipe Band and was previously with the Police Pipes and Drums of Bergen County and has marched in the Rockland County St. Patrick’s Day parade for 10 years.  She has a step- daughter Emily who is currently enrolled in Marist College and will graduate in May 2015.