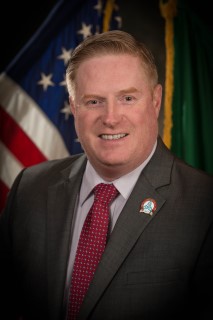 Brendan John McNamara was born in the Bronx on October 22, 1971 to John C. McNamara of Co. Limerick Ireland, and Patricia “nee” Burden. Brendan was raised in the Bronx as the youngest of six boys and attended St. Frances of Rome Elementary School. Brendan graduated from the Mount Saint Michael Academy in 1990 and then studied at The American Academy of McAllister Institute in NYC where he received a degree in Mortuary Science in 1993. Brendan has been a Licensed Funeral Director for eighteen years serving communities throughout the Bronx, Manhatten and Rockland County.
He is currently the Manager of Cassidy-Flynn Funeral Home Inc. in Mt. Kisco, NY.

Brendan has been happily married for thirteen years to my beautiful wife Jennifer “nee” Tesseyman. They have three beautiful children, Emily, Dylan, and Erin. They reside in Bardonia, and are very active in their parish of St. Francis of Assisi in West Nyack. Brendan has been an active in CYO basketball coaching for the past 4 years. He is also active in the community as a Manager for Clarkstown Girls Softball and a Coach for West Nyack Little League tee ball. Brendan and his wfe are also very active in the Bardonia Elementary PTA.

Brendan joined Division 5 in the summer of 2005 and immediately became an active participant. In the fall of 2005. Brendan organized the Division 5 Annual golf outing and continues to continued to run the golf outing for the next few years raising money for our Division 5 Scholarship fund and creating a feeling of unity among our members.

In 201, Brendan was named as the Hibernian of the Year for Division 5 and honored with his family at the Annual Division 5 Dinner Dance.

Over the years, Brendan has sought out opportunities to volunteer and participate in the wonderful service work that Division 5 is a part of in the community. Brendan has dedicated time on Saturday mornings before going to work with my fellow Hibernians with the upkeep of Our Lady Queen of Peace Church, tending to the landscaping or fixing the kneelers in church. Brendan volunteers to help at the Annual Feis to support celebrating all things Irish in our community.