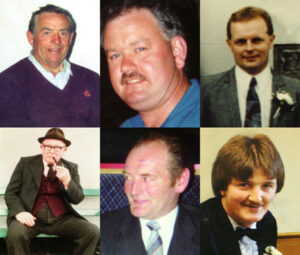 On Tuesday, April 29 at 7:00 PM Eastern time, ESPN will air a documentary about the Loughinisland Massacre. On June 18, 1994 Jackie Charlton’s underdog Irish squad was beginning their World Cup campaign  at Giant Stadium in New Jersey against perennial soccer power Italy.  In  Loughinisland a small Catholic community in Co. Down,  the Heights bar was crowded as resident gathered to root their team on.  Minutes into  the second half begins, two masked gunmen belonging to a  Loyalist murder squad  burst into the bar. Thirty rounds were fired and six innocent men were killed for no other reason than being Irish Catholics watching a  soccer match . The British government said it would hunt down the killers and ensure they were brought to justice.

Twenty years on the families of the victims still look for answers, yet the British government is offering no answers, and in fact their actions raise question concerning their own complicity.  Although the getaway car was recovered the next day, not one person has ever  been prosecuted.   One of the recovered weapons was part of a shipment smuggled  into Norther Ireland for loyalist use by an agent in pay of the British Army.  Other key evidence was “mistakenly” destroyed before forensic evaluations could be done.
It is important that we become aware of the facts of atrocities such as occurred at Loughisland and Ballymurphy  and demand equal justice for all the people of Ireland and answers and closure for the families of these innocent victims.