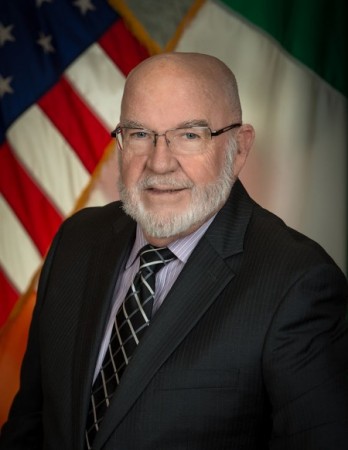 Jim McDonnell was born in the well-known Irish community of that time called the South Bronx. His parents were Irish immigrants from Mayo and Limerick, who met in New York, married and raised six children, Jim being the youngest. He graduated from LaSalle Academy, Iona College for his Bachelor’s Degree, then to St. John’s University and Seton Hall Univer­sity for a Master’s Degree. In 1967, Jim married Ann Ouinn, who came to Woodside, New York, from County Kildare, and is of Leitrim and Kildare her­itage. Ann and Jim are the proud parents of three children: Brian (a bank vice president in Charlotte, N.C., and a Grade I piper), married to Caroline and the father of twins Finley and Dylan; Kristin (a third grade teacher in Closter, New Jersey), married to Demarest Detective Brian Talty from County Clare, and mother to Kaleigh, Kieran and Colin; and Timothy (sales director at Silk Road Technology), living in Tampa, Florida, and married to Amber, an attorney practicing with her father. Jim spent 39 years in education, 33 with the Northern Valley Regional District in Bergen County. The last 15 years of his career he was a district ad­ministrator.

In 1971, Jim joined the AOH Division Five through his good friend Ed Moane. Later, when he moved to Stony Point, he transferred to Division One. During his years in the AOH he has been involved in his Division (offices up to President) with their Annual Communion Breakfasts, dances, etc.).

The Feis: He has been a worker for all 40 years (stage organizer, bar­tender and for the past 25 years coordinating the bagpipe competition).

The Parade: A member of the parade committee since 1985 (past 20 years serving on the corner of Crooked Hill Road and Middletown Road). Secures all the permits needed and coordinates with the town departments in Orangetown.

RCAOH Edward Larkin Memorial Band: A founding member and its drum sergeant for many years.

Historian: For the 50th Anniversary of the Rockland St. Patrick’s Day Parade, Jim compiled, organized and wrote the history of the parade.

Always involved in his hometown of Stony Point, Jim served as a mem­ber of the Zoning Board for 25 years, exempt member of Wayne Hose Fire Company, and presently the Vice President of its Benevolent Association. Former Councilman and currently the Deputy Supervisor of the Town, he is active as a life member of the Knights of Columbus and as a volunteer at the Marian Shrine.