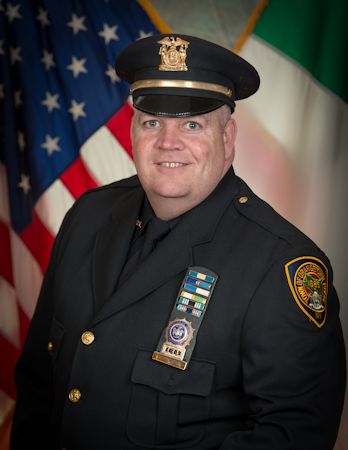 Detective Sullivan was born on February 1, 1969, and raised in Tappan, New York. He is the fourth child in a family of four boys born to Patrick and Kathleen Sullivan. His dad’s family hails from County Cork, and his mom’s (the Giblin family) emigrated from Counties Sligo and Roscommon. The first memory Joseph has of the Rockland County St. Patrick’s Day Parade is standing with his family at John Street and Central Avenue, in the shadows of the old Pearl River High School, and then being quickly whisked off by his parents back to the family restaurant. Joseph’s parents were proprietors of Sullivan’s Tappan Inn on Oak Tree Road. This very popular eatery was the home for the Irish community in this part of Rockland County, and would be packed to capacity with parade participants celebrating a very successful day. Although no longer the owners of the inn, the Sullivan clan, with their extended family, can still be found at the same location watching the parade. What a great day it will be for them this year!

Joseph and his wife Jennifer have two daughters, Olivia and Katherine, and reside in Tappan, where he grew up. He is currently the President of the Volunteer Fire Association of Tappan, New York, and has served his community as a volunteer firefighter for the last 27 years. After graduating Tappan Zee High School, Joseph attended Iona College in New Rochelle, New York. In January 1993, he was appointed as a police officer in the New Rochelle Police Department, and served there until June 1997. At that time, Joseph transferred to the Orangetown Police Department, and has served in various capac­ities, ranging from patrol, traffic enforcement, school resource offi­cer, and his current assignment as a detective in the Juvenile Aid Bureau. He is a member of the Rockland County Police Emerald Society, and previously served as a drummer in both the Rockland County Police Emerald Society Pipes & Drums and in the Pipes & Drums of the Police Emerald Society of Westchester County.

For several years, while working the Rockland County Parade, Joseph has been assigned to the start of the parade at Crooked Hill Road and North Middletown Road, alongside the 2014 Grand Marshal, James McDonnell. Joseph would like to express his appreciation to the parade committee and the Rockland County Ancient Order of Hibernians for this great honor.