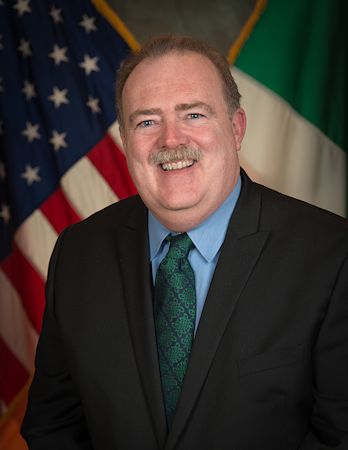 Son of the late Terence and Elizabeth (nee Gorman) Cosgrove. Neil is the oldest of four children, with sisters Nancy, Monica and Colleen. His father was a 28-year an of the NYPD, retiring with the rank of captain, while his mother worked Metropolitan Life Insurance in Pearl River. Both of Neil’s parents instilled in him at an early age an appreciation of his Irish her­itage. His paternal grandparents emigrated from Shinrone, County Offaly; two of his maternal relatives had fought with the 69th New York in the Civil War.

A graduate of Clarkstown High School South, Neil attended Manhattan College, where he earned a Bachelor of Science Degree, with majors in physics and mathematics, and where he has fond memories of being an active member of the Gaelic Society. Neil re­ceived a Master Degree in Computer Science from Polytechnic Institute of New York. He is currently employed as a software development manager at Moody’s Corporation.

An active member of the Ancient Order of Hiber­nians and its support of Irish causes, Neil is the cur­rent National Anti-Defamation Chair for the AOH National Board, where he has been an ardent opponent of any individual or organization that seeks to carica-rjre or defame the Irish or Irish American people. With the support of his brother and sister Hibernians of Rockland County, Neil helped organize a major protest against Spencer’s Gifts, a major purveyor of degrading and negative stereotype laden St. Patrick’s Day merchandise. This protest was covered by the major media outlets in the tri-state area, in addition to being picked up by the national media. Neil has also written several op ed pieces that have been published nationally speaking out against defamation. Recently, a similar protest was successful in getting the Christmas Tree Shop, affiliate of Bed, Bath & Beyond, to pull other merchandise denigrating Irish Americans, and to issue an apology. Neil is also the chair of the Irish American Heritage Month Committee of the AOH, and is dedicated to seeing the many contributions and sacrifices that Irish Americans have made are fully recognized.

Currently the recording secretary for both the Rockland County Board and Division 3, Pearl River, a position he has held for six years, Neil also serves Division 3 as their historian, publishing a monthly history article on Irish or Irish American history. He is a member of the Rockland County AOH St. Patrick’s Day Parade Committee and the Division 3 Scholarship Committee. Neil has served on the Pearl River New York State AOH Convention Committee, the AOH National Presidents’ Testimonial Committee, along with numerous others. In support of their daughter, Kara, who was an ardent Irish dancer and musician, Neil and his wife Margaret have been proud members of the Verlin School of Irish Dance Parents’ Committee, and have helped organize their annual feis.

Neil is married to Margaret Cosgrove (nee Adams), originally a native of Glasgow, Scotland. He is the proud father of Kara and father-in-law to her hus­band, Brendan O’Brien, and a very proud grandfather to his new grandson, Sean Joseph O’Brien.