You are here: Home / Message From The President / A Thank You to Outgoing Rockland County AOH President Vincent Tyer 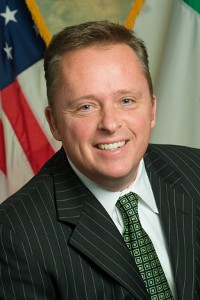 The Rockland County AOH celebrated the end of one of the brightest chapters in its history when they held their County Convention on 9 June at the Irish Cultural Center. Three term County President Vincent Tyer stepped down as County president turning the reins over to his worthy successor, Jim Russell. Vince has been at the helm of the County for six years, a time of growth and achievement for the AOH in Rockland County. During Vince’s tenure, Rockland hosted its first NY State Hibernian Convention which was viewed as one of the most successful and enjoyable conventions the state has ever held. In 2012, arguably Rockland’s most popular event, the Rockland County AOH St. Patrick’s day parade celebrated its fiftieth anniversary in front of record breaking crowds and played host to the newly elevated Timothy Cardinal Dolan.

However, more than these very public accomplishments, during his presidency Vince has united the divisions of the AOH and LAOH in the spirit of “Friendship, Unity and Christian Charity.” Vince thanked the men’s divisions for their support. He also thanked he LAOHs County Presidents he has worked with during his term, Linda Sheridan and Joan Moore for their help and encouragement.
The gratitude of the Rockland Hibernians for Vince’s leadership was expressed by newly elected President Jim Russell as he presented Vince with a crystal plaque. Jim thanked Vince for the strong foundation he leaves the Rockland County AOH as he looks forward to his own term and the challenges and accomplishments yet to come.