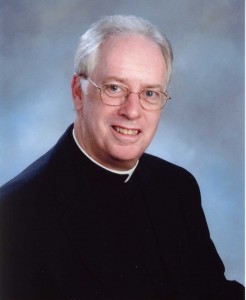 Monsignor Edward J. Weber was born in Manhattan on April 11, 1950 to Edward and Florence (nee Jermyn) Weber.  Monsignor’s Paternal grandparents Frank and Catherine (nee Carney) Weber were natives of Ballyhaunis, County Mayo.  His maternal Grandfather John Jermyn was a native of County Meath while his maternal grandmother Margaret Gillick was from Tooreen, County Mayo.  Subsequently, the Webers moved to the Bronx where Monsignor attended the parish of St. John in Kingsbridge and graduated from the parish grammar school in 1964. Monsignor attended Cathedral Prep High School Seminary and Cathedral College in Douglaston, N.Y. where he graduated in 1972 earning a BA in English.

After graduating Cathedral College, Monsignor entered St. Joseph’s Seminary in Dunwoodie earning a Master of Divinity Degree. Monsignor was ordained to the priesthood on December 11, 1976 by His Eminence Terence Cardinal Cooke. Prior to ordination, Monsignor was assigned to St. Catharine’s parish in Blauvelt for a year as a Deacon.  After ordination, Monsignor was assigned to the parish of St. Sylvester, Staten Island as a Parochial Vicar.   Along with his normal parish duties, Monsignor chaired the local area priest conference and was elected to the first Priest’s Council representing Staten Island.  Monsignor also became a member of the Knights of Columbus where he remains an active member, achieving the Fourth Degree and is Chaplain to the John Cardinal McCloskey Council in New City.

In 1984, Monsignor was assigned to St. Margaret Mary Parish in Staten Island. While there, Monsignor became a local advocate for the Marriage Tribunal, helping to prepare Annulment Cases. In 1985, Monsignor moved to St. Margaret of Cortona in Riverdale. He continued his work with marriage cases and was active in the Area Conference and Priest Council.

In November of 1994, Monsignor became the Pastor of St. Francis of Assisi parish in West Nyack, New York. During his time as Pastor of St. Francis, the parish was showing an increase of members and plans were developed to meet the needs of the new families. There was a three stage development plan: expand the seating of the Church from 300 to 600 seating; expand the Religious Education Building to accommodate the 1,400 students in the program and develop a new parish Center to meet the needs of the Social and Athletic needs of the parish. The first two projects were completed. The parish Center is still to be developed in the future. The life of the parish was renewed with the introduction of parish dances, committees, groups and community outreach programs. Clare’s Cove Thrift Shop was opened and to this day is a wonderful outlet of used items that are sold but also donated to people in the county who are in crisis situations. The senior group of West Nyack meet in Rader Hall each week. The parish has become one of the top in the county during Monsignor’s terms as pastor.

In 1996, Monsignor was reelected to the Priest’s Council, representing Rockland County. In the fall of 2002, Monsignor was named the Regional Vicar of Rockland. While Pastor of St. Francis and Vicar of Rockland, Monsignor was appointed to serve on the Pastor’s Advisory Board for the Cardinal’s Appeal, the Pastor’s Advisory Board for the Bicentennial Campaign, the Inter-Parish Finance Commission, was involved in the “Reconfiguration Committee for the Archdiocese and the School Realignment and Appeal Committee”.   Monsignor was involved in the planning of the Papal Visit of His Holiness, Pope Benedict XVI to New York in 2008.  He is a former Chairman of the Board of Ethics of Clarkstown.  Monsignor also served on the Boards for Helping Hands and Home Health Aides of Rockland.  Monsignor additionally served on the Board for Albertus Magnus High School, and was the Board Chair of Catholic Community Services of Rockland and he was appointed by County Executive Scott Vanderhoef to serve on the 2010 Census Committee of Rockland.

Within the Archdiocese, Monsignor was appointed to the College of Consultors which counsels the Archbishop on a number of vital issues for the Archdiocese.  Monsignor is also active in the Ancient Order of Hibernians, where he serves as  Chaplain to the Rockland County Ladies Ancient Order of Hibernians and has been a Judge for the Annual Rockland St. Patrick’s Parade for nine years.