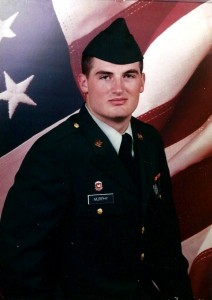 Sergeant Kieran Murphy was born in the Bronx, New York on January 2nd 1983. He was the second of three boys born to Lillian and Patrick Murphy. Patrick hails from County Wexford and Lillians parents come from County Mayo. The family moved to Pearl River in 1995 when Kieran was 12 years old. He attended Pearl River Middle school and High School, graduating in 2001. Throughout all his school years Kieran played Gaelic football and he traveled to Ireland in 2001 with the Under 18 team. He is a recent member of the Rockland County AOH division 3.

Soon after high school graduation Kieran joined The United States Army. While with the Army, as a Combat Engineer, he was deployed in Afghanistan from March 2004 until March 2005. While being deployed he helped in the disposal of thousands of pounds of explosives in addition to being a M240 gunner and went on every Infantry mission as a gunner.

After leaving the Army, he Joined The Fighting 69th Infantry (Irish Brigade) of the New York National Guard. He has been with the 69th since March 2006 to present. He recently returned from another deployment to Afghanistan where he was a team leader to an Infantry line squad. He was injured during his tour of duty when a road side IED (Improvised Explosive Device) blew up and threw him from his truck, badly injuring his leg along with sustaining other minor injuries. He was evacuated first to Germany and then back to the USA where he is still recovering.

During his tours of duty in the Military, Sergeant Murphy has received several awards and commendations including: