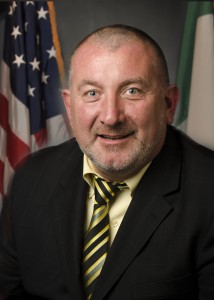 Emmett comes from a large family which mostly still reside in Co. Tyrone, but has 2 brothers who also live in NY. Emmett has worked in the construction business since he came to New York and has since been involved in the bar and restaurant business. Currently he has a bar and restaurant in Poughkeepsie, N.Y. and almost 2 years ago he became involved in The Mansion at Blue Hill Golf Course, which is now called Emmett’s Castle at Blue Hill.

Emmett thrives on being successful at whatever he does and that includes all the fundraisers he involves himself in. He is known for his work with St. Jude’s Children’s Hospital and Special Olympics. Emmett will have participated in the Polar Plunge in Fishkill the morning of this years’ AOH Dinner Dance, February 23rd. It will be a busy day, but as most know, Emmett is not one to complain!

Emmett has spent his entire life (since he could walk) kicking around a football. His efforts in building the Rockland G.A.A. pitch, along with many other people, are a huge priority within the community, as well as a never-ending passion.  Personally, Emmett and his family would like to thank the AOH, and other honorees, for their continual support and award for “Businessman of the Year.”