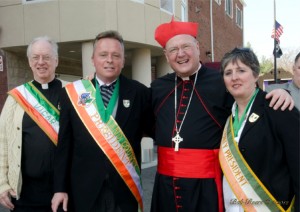 An estimated 80,000 people basked in the sunshine and unseasonably mild temperatures to watch the 50th annual Rockland County St. Patrick’s day parade. The warmth of the day was further enhanced by the bright smile of one newest princes of the Church. his eminence Cardinal Dolan, as he rode down the parade route to a thunderous ovation and then reviewed the passing marchers led by Grand Marshal Raymond Sheridan Jr..

It was a day long to be remembered, and in an age where increasingly we see attempts to defame and caricature our Faith and our Heritage a refreshing reminder what we as Irish Americans and Catholics are really about.

The following groups were cited and awarded trophies for exceptional performance during the parade:

•  ARC of Rockland won the Annie A. and James P. Russell Memorial award for outstanding citizens.