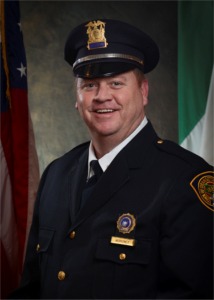 Lt. Michael Moroney joined the Orangetown Police Department in January, 1994.  He graduated from the Rockland County Police Academy with honors, as the Vice President of his class, and received the Director’s Award for Leaddership. He was promoted to Sergeant in May of 2001, and to Lieutenant in July of 2007.  He is a graduate of Iona College in New Rochelle, NY, with a Bachelor of Science Degree in Finance.

Lt. Moroney was born in Pearl River, the 5th of 6 children to Ronnie and Pat Moroney. Ronnie is the daughter of Stephen McFadden of  Adavoyle, County Armagh and Rose McCarten, of  Castlewellan, County Down. Patrick, was born in Mullagh, County Clare, and emigrated to New York in 1956.

Growing up in Pearl River, Lt. Moroney played Gaelic Football with the Rockland County Gaelic Athletic Association from the age of 8 until 18, winning several championships with Rockland, and helped form the Rockland Junior Team back in 1994.  He is still active with the club to this day, with his son Stephen playing football and hurling with the club.  Mike helped coach his son’s football team on the under 16’s, where they won two championships.

Michael is the proud father of three sons, Joseph, a freshman at Oneonta State, Stephen, a junior at Pearl River High School and John, in the 6th grade at the Pearl River Middle School.