You are here: Home / Parade / Past Parade Honorees / Hibernian of the Year Matt Reilly 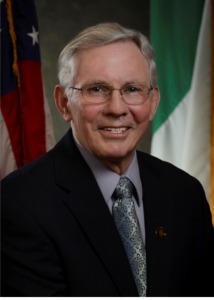 Matt Reilly was born in Drumanymore, County Fermanagh, Northern Ireland and was educated at St. Mary’s School in Drumanymore, until he was 16.  After leaving school, Matt went to work doing road construction in the Derrylin/Teemore areas.  In 1962, he immigrated to NewYork  and a year later married Moira McHugh of Derryvore, County Fermanagh, who had immigrated with him.

When Matt arrived in New York, he worked for 32B Maintenance workers union  for a number of years before being hired by the New York City Transit Authority in 1965.  He took part in the 1966 Transit Strike, led by the famous, fearless labor leader, Michael Quill.  Matt always regarded Mike Quill as a labor leader for the working class.  He retired from there in 1991.

In 1968 they decided to move their family to a country setting and eventually settled in the little hamlet of  Blauvelt, NY. They moved into their new home on Good Friday April 13, 1968 and every Friday since then has been a Good Friday!

Soon after moving in, Matt had the good fortunate to meet Ed Moane.  After much talk and encouraging words from Ed, Matt agreed to transferred his AOH membership from Division 9, Inwood, NY,  to the newly formed Terence J. McSwiney Division 5 Chapter in South Orangetown.

Due to Matt’s involvements with just about everything Irish;  whether it’s  a fundraiser for a friend, a political cause or anyone in need of a helping hand, Matt has been recognized on many different occasions. These include Aide to the Grand Marshal, New York City Parade, 1974, Grand Marshal, Rockland County Saint Patrick’s Day Parade, 1974, RCAOH Presidents Award 1999, RC Feis 2006, where he was co-honored with Moira, Sleepy Hollow St. Patrick’s day Parade Committee 2005 and the Bergen Irish Association in 2002.

Matt and Moira are the proud parents of four girls, Carmel, Erin, Fiona and Shauna and nine grandchildren, Joe, Siobhan, Bridget, Caitlin, Mary Rose, Helen, James, Dylan and Mossy. Their hopes are their children and their children’s children will keep the tradition alive.

Matt is humbled and honored to receive the 2012 Hibernian of the Year. He wishes to extend his heartfelt thanks and gratitude to the men and women of the AOH/LAOH. God Bless all of you and God Bless America!