You are here: Home / Parade / Past Parade Honorees / Businesspersons of the Year Helen & Sean Slattery 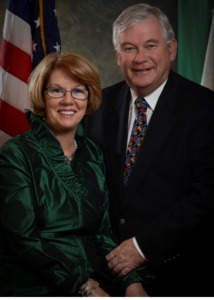 Sean was one of ten children born to Margaret and Jack Slattery and was raised on Clonliffe Road in Dublin and attended Scoil Ui Connell Schools where he played Gaelic Football and spent nearly every Sunday in Croke Park watching the “Greats of that time”. Sean went into the bar business at the early age of fifteen and left for the United States on May 1970.

Helen was born to Mary and Patrick Moroney in Doolough County Clare, the sixth of eight children, and attended Doolough National School. Later work on the “Beehive” Restaurant in Ennis and shortly after immigrated to the United States in 1970.

Sean was fortunate to land a job in Durty Nellies on Kingsbridge Road in the Bronx with the Moroney Brothers. While working at Durty Nellies, Sean met his darling, his “Lovely Rose of Clare”, Helen.

Sean & Helen got married in November 1974 in “Our Lady of Angels” in Bronx, NY. Later moved to Waldwick, New Jersey and opened their own business in 1986 in Nyack, Suffern and Piermont, respectively.

Sean served on the Executive Committee of the Chamber of Commerce of the Nyacks to help attract more business and visitors to the beautiful waterside villages.

Sean & Helen are proud parents of Kevin and Mary. Kevin married Anna Mileran and they have given them a gorgeous granddaughter Kaylee Jane and another blessing soon to be born. Their other darling is Mary, who is attending college in High Point, NC and will be graduating in May 2012. She is doing quite well and they are so proud of the lady she has grown up to be.

Sean states that the Catholic Church has been a major impact on their personal life. They are parishioners of Saint Luke’s RC, Ho-Ho-Kus, New Jersey since 1979. Sean and Helen have served on the Cornerstone Retreat Core Committee and Helen is an Extraordinary Eucharistic Minister. They also served on the Saint Thomas More Interparochial School Advisory Board, Don Bosco Preparatory School and Immaculate Heart Academy HS.