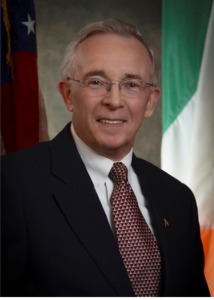 Cy’s 49 year history in the United States began in 1963 when he emigrated from County Monaghan one of three children Cy is the son of Lilly and the late Peter Hughes of Moy’s Clontibret County Monaghan where he attended Moy’s National School. He is married to his Peggie for 43 years and are the proud parents of a daughter Kelli and Joseph both of Orange County and the proud Grand parents of 6 grandchildren TJ, Kate & Caroline , Emma, Kaeleigh and Christine .

Cy began his long 29 year career with the New York City Transit Authority where he served as director of maintenance training at the time of his retirement. Always interested in supporting and promoting his Irish culture, he joined the New York City Transit Emerald Society in 1969. A very active member, he held all active elected offices in this organization until his retirement in 1997. Cy continued working, he now works for the Union Free School District of the Tarrytowns where ie is the director of maintenance and transportation.
His involvement in Rockland County began in 1978 when he joined AOH Division 1. He has held all elected offices in Division 1, including serving as President for 6 years.  He continues to this day to be a very active member.
Cy’s AOH activities have extended beyond the Division level to the County Board level, where he has held various elected positions for 34 years, including serving as County President for 4 years. He is currently serving as our present County Financial Secretary and in July 2003 was elected to the AOH State Board as Director of district 8.
His love for these organizations and the energies he expends on it are boundless. Over the years he has worked diligently on numerous committees. He has conducted several fund-raising raffles for the parade; he has been Chairman of the Emerald Ball Journal, works annually on the Feis Committee, the Parade Committee, the halfway to St. Patrick’s Fund Raising Committee and the Great Hunger Memorial Committee and most recently was elected as President of Tara Circle. Cy is also involved with other organizations; Irish American Cultural Center, Friendly Sons of St. Patrick, Cy is very active in the Monaghan Society and is the past President of the Mac Bride Chapter of Irish Northern Aid.
He was honored as Hibernian of the Year in 1995 and was selected as Parade Commander for Rockland County St. Patrick’s Day Parade in 2001 and in 2005 was selected as Grand Marshal of Rockland County St. Patrick’s Day Parade. This year we honor Cy with his election to be the Rockland County AOH Aide to the Grand Marshal of the New York City St. Patricks Day Parade 2012
On top of all of this, Cy has been an active member of the United States Air Force reserves, as a civil engineer for 19 years and in 1999 was promoted to First Sergeant of the 105th Civil Engineering Flight, from which he retired in 2003 after serving faithfully for 26 years, including an active duty assignment at ground zero during the 9/11 tragedy as well as serving in Iraq when his unit was activated in 1991 during the Iraq war. Cy stands by his belief that “in leading by example and creating an awarness of Irish culture in our homes, we can instill a pride and knowledge of our proud Irish heritage in future generations.”

It is common knowledge that if you need something done, Cy is always there to help.