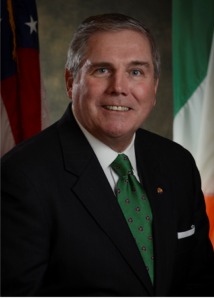 It is appropriate that the Grand Marshal of this year’s 50th Rockland County St. Patrick’s Day Parade connects us to the Parade’s Origins.  Raymond Sheridan Jr. is the son of Raymond Sheridan Sr., who borrowed the money to hold the first Rockland County St. Patrick’s Day parade in 1963, and served for several years as the Parade Chairman for many years.  Ray Sheridan Sr. was Grand Marshal of the Parade in 1970 and Ray is proud to keep the Irish and family tradition alive in 2012.

Ray was born in the Bronx to Raymond Sheridan Sr. and Wilhelmina Hanna.  Ray has five siblings, William and Wilhelmina Hanna (children from his mother’s first marriage whose husband had passed) and Marion, Gerard and Timothy Sheridan.  Rays Irish connection traces back to his Great-grandparents who had emigrated from the Falls Road section of Belfast and from Dublin.

Ray is a graduate of St. Margaret’s School, and Pearl River High School.   Ray received a Bachelors in Business Administration from Pace University.  Ray continues in another family tradition, running the family business, Raymond Sheridan Financial, Inc., which was founded by his father 49 years ago and it noteworthy for its service to the Pearl River Community.

Ray is the proud father of three children. Julia is an underwriter for QBE insurance in NYC, Raymond III is attending Pace University, and Andrew attends Rockland Community College. All three are Hibernians. keeping the tradition alive.