You are here: Home / Event / Past Event / Hiberniam of the Year: Thomas William Leavy 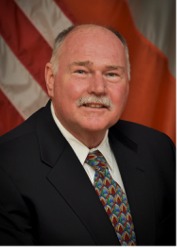 Tom Leavey was born in the Bronx, NY to Margaret Tenny Leavey and Harry B. Leavey. His family moved to Rockland County when he was 9 and he was raised in Orangeburg, NY with 7 brothers and sisters. Tom attended St. Catherines grammar school, Albertus Magnus High School in Rockland County and then graduated with a B.A. from Mankato University in Minnesota. He also has a Certificate in Labor Relations from Cornell Industrial Labor Relations School.

As a younger man Tom travelled extensively throughout the United States visiting 46 states by the time he was 26. He played semi-pro football with the Rockland Warriors and had his own roofing business along with many side jobs where he got to know his community and the importance of being a part of it.

Tom’s career job was to be a theatrical teamster with The International Brotherhood of Teamsters, Local 817. He worked on the TV show Sesame Street for more than 27 years and as a captain on such productions as In The Gloaming, The Jury, The Bourne Supremacy, Fantastic Four, Love Monkey, 30 Rock, Halloween II, You Don’t Know Jack, Son of No One, Premium Rush and countless others.

Tom was a First Responder after the attack on the World Trade Towers and was involved in the rescue operation at Ground Zero.

He resides in Valley Cottage, NY with his wife Barbara and their many rescue dogs. His son, Tom Jr, a computer security specialist, is a frequent visitor whenever he can get away from his busy NYC life. Tom’s hobbies include writing, photography, canoeing and jogging.

Throughout the years Tom has volunteered and participated with various local organizations. He coached St Catherine’s CYO basketball, coached Blauvelt Little League baseball, received a certificate of achievement from The National Academy of Television Arts & Sciences for his contribution to the Emmy Award winning show Sesame Street, and received an award for his years of volunteer work with the Soap Box Derby in Pearl River, NY. He assisted in organizing the Rockland County Fair in Clarkstown and also volunteers at the Rockland County Feis.

Tom is a member of the Haverstraw Elks Club, served as 1st vice president of Hi-Tor Animal Care Center and is currently on the Board of Directors of Hi-Tor ACC. Tom was an Ed Moane recruit to the AOH. Over time he was elected to the position of vice president and is presently serving his third year as president of Division 5. His goal is to attract new members by participating in events that will benefit the Irish community.