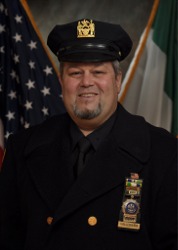 Ernest was born in Staten Island, N.Y.. He is the proud great grandson of Julia Curren of County Kilkenney. Ernie fondly remembers hearing his father’s stories about summers he spent on the family farm in Ireland where the family raised horses.

Ernest attend grammar school education taught by the Sisters Of St Dorothy and attended St Peters Boy’s High School. Ernesy went on to attended St Johns University attaining a Bachelors degree in Marketing and Finance. Ernest served his country as a member of the NYS National Guard and served as a gunner and Tank Commander in the 101st Cav.

Ernest followed in a proud family tradition of service in the New York Police Department, becoming rhe third generation to become a Police Officer. Ernest entered the Police Academy in 1990 and was promoted to Detective in 1999. Ernest served as a uniformed Patrol Officer and as a member of the Auto Larceny Unit, Street Crime Unit and Vice Enforcement Division . Ernest also served as a Union Delegate to the Detectives Endowment Association.

In 2003 Ernest moved with his family from Staten Island and relocated to New City in Rockland County, only ro see his career in Policing came to an abrupt halt in 2004 when he was diagnosed with stage three Non Hodgkins Lymphoma. Thanks to an experimental treatment and the loving support and care of his wife, Ernie was able to beat this terrible disease.

With an appreciation for God’s blessing, Ernie has dedicated himself to service to the community. He is a Catechist at St Francis in West Nyack and teaches 5th and 8Th grade religion. With his sons he is actively involved with the Boy Scouts of America and is a Cub Master for Pack 46 New City and an Assistant Scout Master for Troop 78 Nanuet.

Drawing on his own experience with serious illness, Ernie has been an active advocate for those afflicted with 9/11 related illness. I’ve travelled to Washington D.C numerous times and testified before Congerss with NYC Police Commissioner Raymond Kelly advocating for the 9/11 Zadroga Bill. I thank God that the bill was finally passed for the benefit of the first responders and people who were afflicted by the effects of the 9/11 terrorist attack.