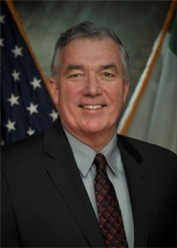 Tim was born in New York City in 1954, the descendant of Irish immigrants form Counties Cork and Kerry. Tim graduated Bergen Catholic High School in 1972 and went on to earn a Bachelor of Science Degree at Mercy College and a Masters Degree from Long Island University. Tim later went on tp graduate from the FBI National Academy.

Following in the long established Irish American tradition of public service, Tim joined the Clarkstown Police department in 1978 where he is currently serving as a Detective Sergeant. Tim is a past president of the Rockland County Patrolmen’s Benevolent Association in addition to being a former Vice President of the Rockland Police Emerald Society. Tim was recognized by the Irish Echo as one of the top 35 Irish Americans in Law Enforcement. Tim has also rendered public service as a Councilman and Deputy Supervisor for Stony Point.

Tim actively lives the Hibernian motto of “Friendship, Unity and Christian Charity.” Tim is an active supporter of Camp Venture and the Children of Promise Stable; an organization that provides therapy and builds confidence in those with special needs through equine programs. As part of one fundraising effort Tim spent 48 hours on a horse to help raise funds to build a barn in support of the program. Tim acted as a liaison for Detective Stephen McDonald’s Mission for Peace and Reconciliation to Northern Ireland.

Tim has been married to his lovely wife Patty for 31 years. They have one child, Meghan, who is an attorney serving in the Brooklyn District Attorney’s Office.