The following is the biography of the Late Senator Thomas Patrick Morahan when he was the Grand Marshal of the Rockland County St. Patrick’s Day Parade in 2008.  This great Irish American will be missed by all who new him. 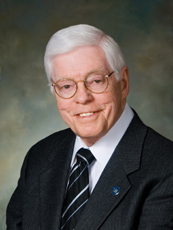 Senator Thomas Morahan was born in the Bronx to the late Thomas and Margaret (Dermody) Morahan. His father was from Coote Hall, County Roscommon, and his mother was from Granard, County Longford. Tom was raised in the Bronx with his three sisters, Sr. Margaret Thomas OP, Margaret and Sr. Marie Joseph OP. There he attended Holy Family Elementary School and graduated from Cardinal Hayes High School.

Tom served his country during the Korean War, as a member of a US Army Flash Ranger Battalion attaining the rank of Staff Sergeant. In 1952, Staff Sergeant Morahan married Helen Killion. Shortly thereafter, Tom was honorably discharged from the Army and in 1954 the Morahans moved to Queens, where they resided for almost a decade before moving to Rockland County in 1963.

The Morahans are members of St. Augustine’s RC Parish in New City. Helen and Tom raised seven daughters, Margaret, Helen, Maureen, Joan, Nancy, Eileen and Theresa. They have been blessed with seventeen grandchildren. Tom has had an extensive and successful business career. For almost 40 years, Tom applied his skills and talents by working himself through the ranks of the NYNEX Corporation to an executive management position. This was followed by six years senior management service with Orange and Rockland Utilities.

Tom is proud of his Irish Heritage and is active in several Irish Cultural groups and has been recognized for his efforts. He has been a long time member of Division #2, Ancient Order of Hiberians and an active supporter of the Annual Rockland County AOH Feis. He also is a member of the Telephone and Communications Emerald Society and former member of the National Irish Political Action Committee. Tom is also a member of the Rockland County Friendly Sons of St. Patrick as well as the Irish American Legislator Society. Over the years Tom has been recognized by Irish American Organizations. He has been the Emerald Society of Telephone and Communications “Man of The Year” the PEC “Man of the Year”. He has also been recognized by the Gaelic Athletic Association, and was the Rockland County’s A .O. H. “Man of The Year”.

As with many Irish Americans, Tom strong feelings of community called him to public service. As a member of the Clarkstown Zoning Board of Appeals; as a County Legislator; as a member of the New York Assembly; and presently as a New York State Senator, Tom has devoted his time and energy speaking up for those not always able to represent themselves.

Completing his fifth term in the New York State Senate, Senator Morahan presently serves as Chairman of the Senate Committee on Mental Health and Developmental Disabilities. He was also appointed to a Senate Leadership post, serving as Senate Majority Liaison to the Executive Branch. In prior years, Senator Morahan chaired the Senate Elections Committee, as well as the Senate’s Committee on Veterans and Military Affairs.

Thomas Patrick Morahan is highly honored and truly humbled to have been chosen Grand Marshal. He is exceptionally proud to have the privilege of leading the A.O.H. down Central Avenue in Pearl River on March 9, 2008.