You are here: Home / Message From The President / 2009 Ireland Flood Relief Appeal 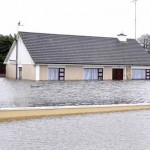 have been nothing short of catastrophic, conditions caused by flooding have reached a level of devastation that actually parallels that encountered by New Orleans and the Gulf Coast following Hurricanes Katrina and Rita in 2005.

First hand reports and information from various news agencies indicate that at a minimum the current major areas affected include Clare, Cork, Galway, Limerick and Roscommon with reported rivers that have burst their banks, bridges collapsed and major roads shut down. Homes in Down, Armagh and Belfast have been damaged in the high waters and some residents in the east of the city have been forced to seek emergency accommodation. Property damage and the unsanitary conditions being caused as a result are extensive. South of the boarder the Midlands and Kilkenny were among the worst hit regions, with serious flooding affecting parts of Kildare, Westmeath, Offaly, Tipperary and Laois.

The Ancient Order of Hibernians in America is committed to doing everything within our power to aid those in need as a result of the current devastation and we are joining our Brothers Hibernians from the Board of Erin in raising funds to send to the Irish Red Cross. We are certain that, as has happened so many times in the past, the compassion, support and generosity of our membership will once again make our efforts a success.
We ask that you distribute this information to individual members, divisions and boards within your jurisdiction. Include it in your newsletters and add it to your web sites. No donation is too small. Checks should be made out to the AOH National Board 2009 IFR Appeal and mailed to the address above.

Thank you and God bless you for your anticipated support.