You are here: Home / Event / Past Event / Join Us as Rockland Remembers the Heroes of 1916 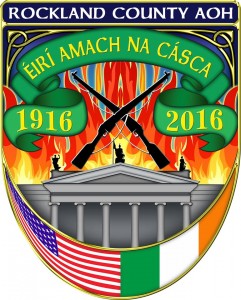 On Easter Sunday April 24, 1916, Irish men and women reminded the world that Ireland was still a Nation seeking its freedom…..

The Ancient Order of Hibernians men and women, along with cooperat­ing Irish-American Organizations, will commemorate the 100th Anniversary of the Easter Rising of 1916. It is the goal of the Committee to remember with reverence and honor the sacrifices made that day, 100 years ago, when the blood of heroes gave us a Nation Once Again.

It was the courage and determina­tion of those men and women that renewed the cause of nationalism among the Irish people. Too long had England deprived the Irish people of their culture, a culture that was inclu­sive of their language, their sports, their music, their dance and their liter­ature. Without a ‘culture’, there is no nation. Therefore, it was the purpose of those Heroes to rebuild the Nation of a Republic of Ireland by recreating the Irish Culture.

All seven signatories were convicted of treason by a military court and ex­ecuted at Kilmainham Jail by firing squad. Their execution stirred the people, especially since they were not even allowed a proper funeral with the families. Instead they were placed in a common grave with quicklime placed on their bodies. The uprising was over, but a spark had been lit and led to the Irish Free State being established in 1922. The Republic of Ireland be­came a reality in 1949.

COME – Join with the Irish-Ameri­can Community of Rockland County New York as we commemorate what took place 100 years ago in Dublin, Ireland. In our statement of purpose for the commemoration, we remind our community that we are Ireland’s exiled children in America. Let the words of the Irish National Anthem be our guide: “…some have come from a land beyond the wave.” In Ameri­ca and Ireland, support was given to these Heroes of Easter Week 1916 that Irishmen of future generations might control their own destiny. Perhaps the day of a United Ireland will soon be a reality.

Join us as we remember those Heroes on the Centenary of the Easter Rising on April 24, 1916.
Place:  Rockland GAA Fields

The March Meeting of the Rockland County Board is cancelled